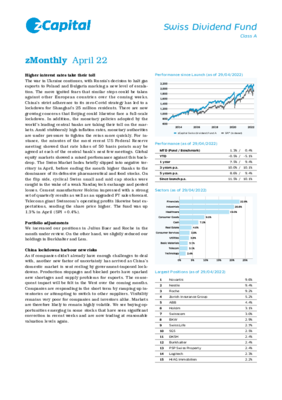 The fund was up 1.3% in April (SPI +0.4%) in the month under review. We increased our positions in Julius Baer and Roche. On the other hand, we slightly reduced our holdings in Burkhalter and Lem.

The monetary policies adopted by the world’s leading central banks are taking their toll on the markets. Amid stubbornly high inflation rates, monetary authorities are under pressure to tighten the reins more quickly. The SMI briefly slipped into negative territory in April, before ending the month higher thanks to the dominance of its defensive stocks. On the flip side, cyclical Swiss small and mid cap stocks were caught in the wake of a weak Nasdaq tech exchange and posted losses.

China’s domestic market is sent reeling by government-imposed lockdowns. Production stoppages and blocked ports have sparked new shortages and supply problems for exports. The consequent impact will be felt in the West over the coming months. Visibility remains very poor. Markets are therefore likely to remain highly volatile. We see buying opportunities emerging in some stocks that have seen significant correction in recent weeks.